Data on the presence of animals is essential to assess their status in the environment and the impact of various disturbances and land management practices on their populations. Many methods can be used to collect such data. These methods have different levels of accuracy, effort, cost and required expertise. ARI has been using automated cameras to conduct mammal surveys for many years. These cameras are very useful and cost effective as a survey tool because they can be left unattended for several weeks at a time. ARI has significant experience in the use and improvements of these cameras. We also lead in the training of other users in standardised methodologies associated with this survey tool.

The units consist of a digital camera that is triggered when a sensor detects a moving heat source, such as an animal. There are essentially two types of cameras: infrared-flash cameras generally suited for recording animal behaviour over long periods, and white-flash cameras suited for the identification of small mammals. The camera and sensor are housed in a weatherproof case, which can be secured to a tree or stake. Various bait types are housed in custom cages so it cannot be taken or consumed (and therefore continue to attract animals to the site). Cages are positioned so that there is a clear line of sight from the camera. Sensitivity levels and programming functionality of cameras can be altered to suit a range of specifications, e.g. different animal groups and climatic conditions.

ARI has used white-flash cameras to detect the presence of threatened species such as Leadbeater's Possum, Spot-tailed Quolls, Long-footed Potoroos and Smoky Mice, to obtain estimates of detection probabilities, and as a general survey tool. Infrared cameras have been used to document mammal behaviours and interactions such as the behaviour of wild dogs at buried 1080 meat bait stations. The cameras have also been used for detecting other introduced species such as foxes, feral cats and deer. 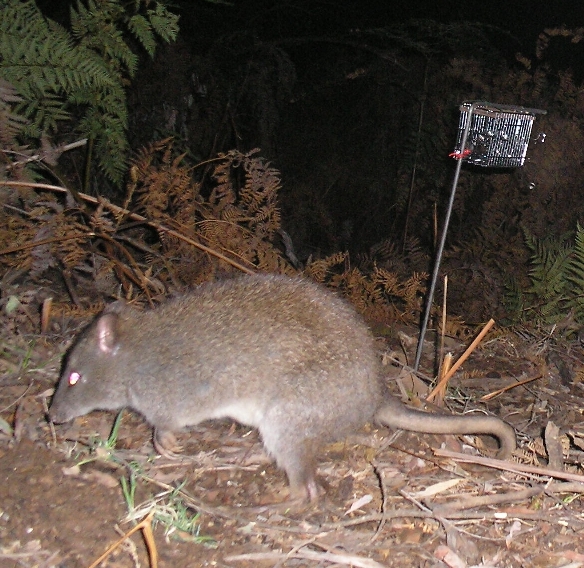 A short video titled "Camera trapping wildlife surveys" showing how cameras are installed, and examples of wildlife photos from our projects is available on the DELWP YouTube channel, and can also be viewed below: