Surveys for the critically endangered Glossy Black-Cockatoo from before and after the 2019/20 Black Summer bushfires shed light on the impact of this catastrophic event. By searching for feeding signs from this picky eater, ARI researchers were able to determine whether they were still living in the same places after the bushfires.

The Glossy Black-Cockatoo lives in eucalypt forests and woodlands in far eastern Victoria. It is threatened by habitat loss, and frequent drought and bushfires can severely reduce the number of food plants and suitable nesting hollows available. In Victoria, the Glossy Black-Cockatoo mainly eats the seeds of the Black Sheoak Allocasuarina littoralis, using their specialised bills to extract the tiny, unripened seeds from the woody cones. They are thought to be the only bird species that feeds on the Black Sheoak in this manner, so the remains of eaten cones are a clear sign that Glossy Black-Cockatoos have been feeding in an area.

In 2019, to better understand the range of Glossy Black-Cockatoos in eastern Victoria, ARI researchers surveyed their known habitat for the presence of this species. To do this, they searched stands of Black Sheoak for eaten cones. These surveys provided a critical baseline to later assess the impact of the Black Summer bushfires. After the fires, the same sites were surveyed again for evidence of Glossy Black-Cockatoo feeding. The survivorship of Black Sheoak and the overall availability of cones – a critical food resource – were also assessed. Key findings include:

Clearly, population numbers in burnt habitat have declined greatly since the Black Summer bushfires and, even in large unburnt patches, the proportion of sites with feeding signs fell over the following two years. Population recovery is expected to be very slow because it is dependent on how quickly the resprouting Black Sheoak take to mature and produce cones. This research project was funded by the Commonwealth Department of Industry, Science, Energy and Resources.

Other work is being done in the region to support the Glossy Black-Cockatoo. DELWP Gippsland has a Monitoring, Evaluation and Reporting program for bushfire management, which has a project to 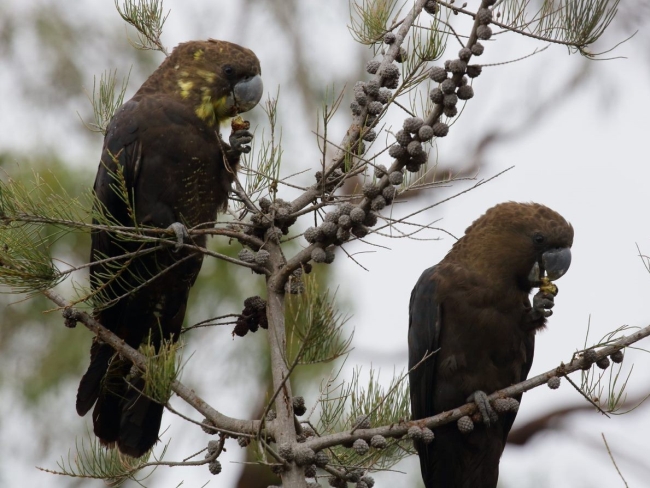 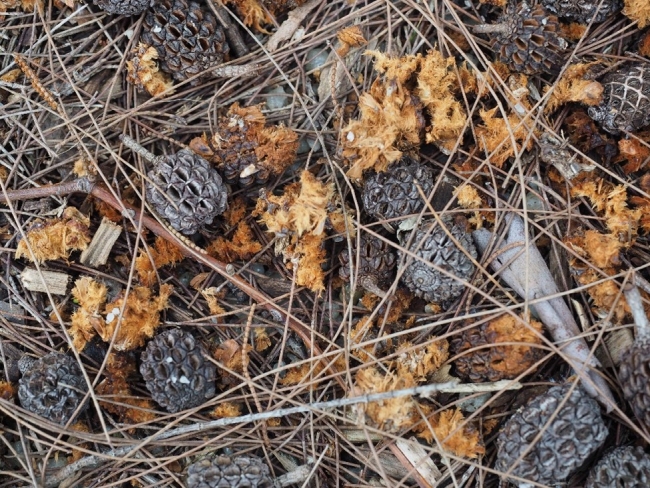 A regenerating Black Sheoak, 22 months after the fire.

map the location of Black Sheoak feeding stands to improve our understanding of the important feeding areas. This allows a focussed approach to be applied during planned management burns in those areas, protecting these important food sources for the Glossy Black-Cockatoo. Approximately 1800 hectares of priority feeding area has been mapped so far. This work has been funded by the Federal Department of Agriculture, Fisheries and Forestry and the Victorian Government’s Bushfire Biodiversity Response and Recovery program and also supported by Forest and Fire Operations staff.

Surveys looking out for the presence of the Glossy Black-Cockatoo have also been undertaken by members of Birdlife East Gippsland, a volunteer group that contributes to data collection and photographic evidence of this enigmatic bird.