Tracking turtles to determine impacts of water for the environment

River regulation can alter natural flow regimes, reduce connectivity and decrease food and habitat availability for aquatic fauna such as turtles. While the impact of river regulation on turtles is not well understood, there is evidence that turtle body condition can improve following the release of environmental water. Water releases have been used along the Murray River to restore and improve its health. To inform how water releases influence turtles, ARI is studying the impact of flow regimes on turtle movement and habitat use within the floodplains of Barmah-Millewa Forest, with a focus on the threatened Murray River Turtle.

In Victoria, the Murray River Turtle is found along the Murray River and associated wetlands, floodplains and creek lines. However, when water flow is regulated, their movement between these areas may be restricted. Turtles may then be unable to access foraging habitats, which can result in a decrease in body condition and reproductive success. To better understand how turtle movement is influenced by different levels of river flows, individuals will be tracked during non-flood and natural and planned flood periods. The movement data will value-add to population condition data recorded during The Living Murray Turtle Condition Monitoring Program.

To track their movements, adult Murray River Turtles will have acoustic radio-tracking tags attached to the side of their shells. Receivers at fixed locations will record when a tagged turtle moves past, telling us where individuals are moving and how long they spend within broad areas. We can then compare if habitat use changes with water availability. For example, turtles may be restricted to the river in low flow but move onto the floodplain during flood events. 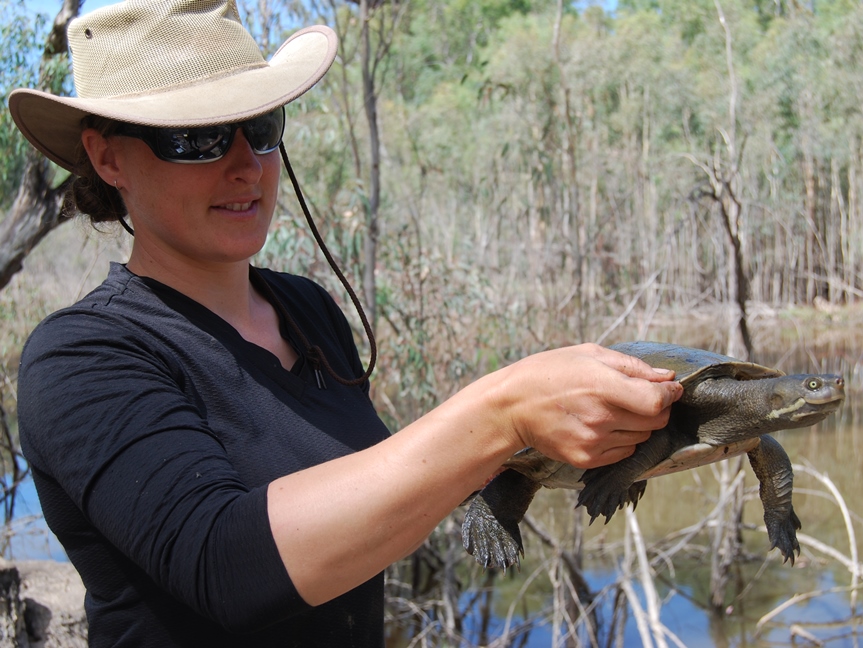 Understanding the relationship between water regulation and turtle movements, and how this may affect turtle health and reproduction will contribute to management aimed at improving turtle habitat.

This project is being funded by The Living Murray Intervention Monitoring Program and is a collaboration between Goulburn Broken CMA, NSW Parks and Wildlife Service and MDBA.