The late 2019 – early 2020 ‘Black Summer’ fires were unprecedented in their impact and scale. Extensive tracts of the coastal side of the Great Diving Range in south-eastern Australia were affected, with significant impacts on biodiversity.

Most reptiles and frogs have small home ranges, and even the larger, more mobile species are unable to escape large, fast-moving fires. For many, including some threatened species, eastern Victoria represents a large, and often the most secure and continuous, proportion of their state distribution. Field assessments of fire impacts and threats immediately after fires like this allows us to understand the impacts of the fires, the most immediate threats, and quickly implement recovery management actions.

ARI completed surveys within months of the fires, targeted at species particularly vulnerable to post-fire threats, such as those where: 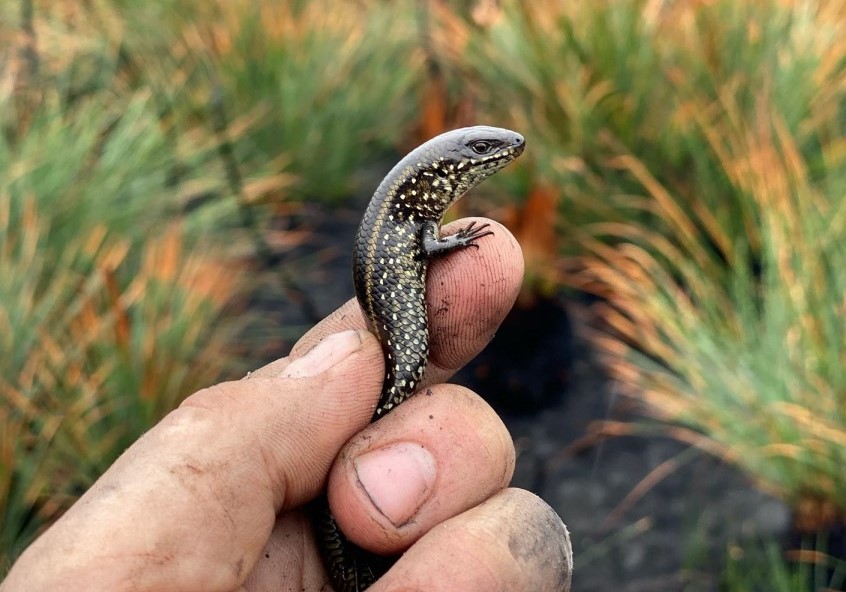 Immediate and short-term impacts of these fires on reptiles and frogs identified during our surveys include:

Despite the challenges of accessing fire-affected areas (some were unable to be reached), most of fire-affected East Gippsland and the alpine region were surveyed in the months before winter. There were mixed findings. Some species were not detected or only found in low numbers in burnt areas (e.g. Gippsland Water Dragon). For some species, most (but not all) of their habitat was unburnt (e.g. Alpine She-oak Skink), and others appeared to be more able to persist in burnt areas than most species (e.g. Yellow-bellied Water Skink).

Some key observations from the surveys include:

In addition, several species were unable to be properly surveyed due to access issues, such as the Alpine Bog Skink, Alpine Water Skink, Mountain Skink and Copper-tailed Skink. Confirming the status of these species in burnt areas is a high priority this spring and summer.

Concerns for remaining populations include ongoing exposure to introduced predators, further degradation of habitat from horse and deer trampling and grazing, and geographic isolation that may lead to a loss in genetic diversity. Dense vegetation regrowth can block sunlight from reaching key habitats, making them unsuitable or suboptimal for extended periods. Increasing frequency of fires can permanently change vegetation communities, sometimes rendering them unsuitable for reptiles and frogs that previously occurred there.

This project was funded through the Victorian Government’s Bushfire Biodiversity Response and Recovery program (Phase 1).